My academic disciplinary home is in the field of Ecological Economics (EE). EE differs from traditional economics because it places the economy and humanity as a subsystem of the environment - so everything has to go through a sustainability lens first, rather than after. The roots of EE come from systems thinking, a very similar field to design thinking.

My initial training was in systems thinking, which is why I think I gravitated so quickly and strongly to UX Researcher - there are multiple overlapping areas.

Despite the significant overlap in EE and systems thinking, students aren't trained on systems methodologies for engaging with change. Together with a close colleague we decided to hold a training seminar to teach a group of students two of our favorite systems methodologies: Soft Systems Methodology and Critical Systems Heuristics.

This work resulted in an academic paper: Fostering critical pluralism with systems theory, methods, and heuristics (where the images on this page are from) because as we attempted to train the students using the methods themselves we ran into some major issues. Basically, we invited real world actors to come and engage with a problem they have in order to teach the students, but the students were not ready for this approach and we were not knowledgeable enough with the real-world actors to be useful.

After this, the initial research question was no longer relevant at the end of session one, which is a common SSM study outcome. In the end, these techniques are about teaching and challenging groups to think in new ways. The first workshop called into question our belief that we were prepared to utilise CSH in a real-world context. We realised that the students needed further training and that the relevant groups didn't have enough people to make the second workshop worthwhile. We decided to focus on our final aim of teaching the students the techniques, so we switched them into participants and applied the training to a subject they are quite familiar with: ecological economics. 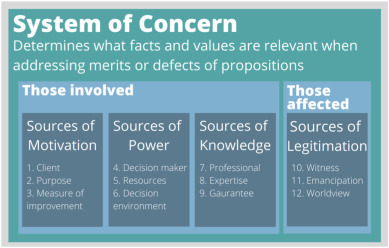 Critical systems heuristics (CSH) is a set of 12 questions that evaluate and attempt to improve a situation. The questions are really about boundary critique to help understand assumptions and enhance mutual understanding between actors. It is also meant to promote reflective practices by the researchers. We used these questions to have the participants think critically about their own discipline. 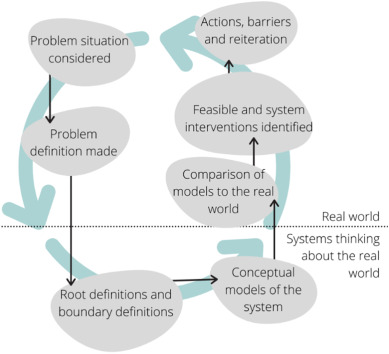 Soft systems methodology is my favourite methodology. It is very similar to design thinking for user experience research. It has seven iterative steps that include: 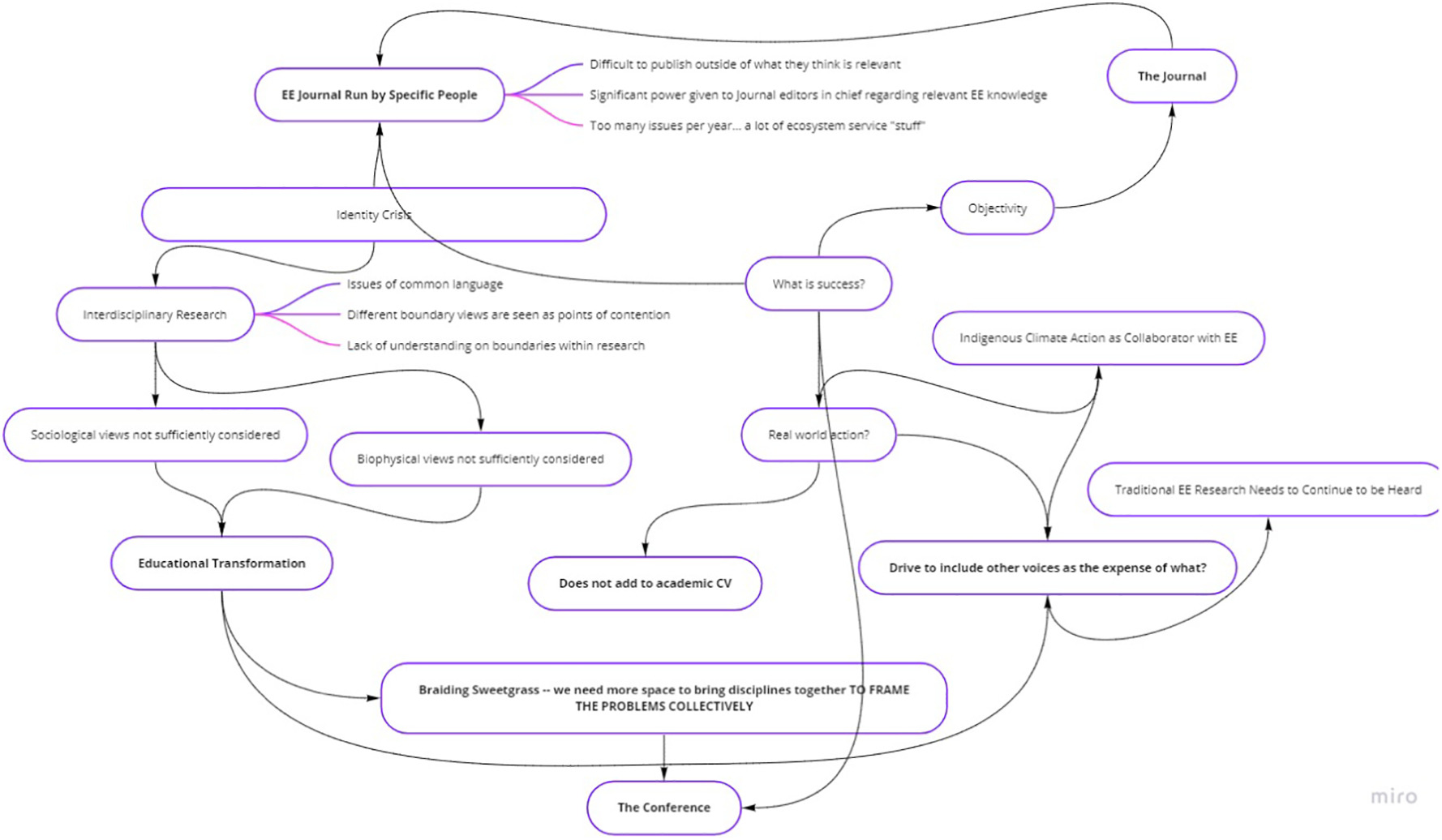 Mind map of the problem - not easy to read, but there are zoomed in pictures in the paper.

"Ecological Economics suffers from an identity crisis that likely spawns from the transdisciplinary nature of the discipline in three specific ways, namely a) some think their area of research is insufficiently considered, or tensions between hierarchies are not sufficiently recognized and explored or are done so reductively; b) interpretations and practice of EE narrowly puts economics (valuing the outputs of nature toward humans) as the “central focus,” and c) insufficient attention given to the power and politics in EE, including but not limited to who owns the research outlets and who defines the field - these three issues create a barrier to the identity of EE, education, research, and activism. The participants identified three overarching problematic areas: a) interdisciplinary struggles of ecological economics; b) the word ‘economics’ in the discipline title too narrowly defines the real work conducted or is too narrowly understood, despite an expanding conceptualization of economics being an EE normative goal, and this narrow conception constrains EE, and c) insufficient attention to power in various ways."

After we isolated the problem we worked through the critical system questions (answers available in the paper) and created a mindmap of the problem.

We ended this paper by making a pretty bold claim that we were uncovering a new paradigm for ecological economics research that only further requires more systems thinking.

We said that the findings point to a simple topic for future research: how existing institutions, organisations, learning frameworks, and knowledge distribution platforms aid or hinder the shift to emerging EE. The importance of this paradigm in terms of ecological economics normative ideals and the recently revealed research programme both demand further investigation. The next step would be to hold similar workshops with additional emerging and established scholars to confirm the shift and compare the outcomes of the CSH workshop with previously held ideas. These findings also highlight the need for ecological economics to take a more holistic approach to systems thinking in order to interact with this regenerative, reflexive, adjacent potential, and relational worldview. Using methods like CSH, you can better explore all of these features and the interconnected intricacy among them.

This research project was one of the most transformative projects I had been a part of. I had never faced a major issue with a focus group, research study, interview, or real-world actor. No one had ever pushed back on my methods or given me a hard time about my approach. However, in the first workshop with the real world actors I was criticized significantly for the assumptions I had made and for bringing in a real-world group with untrained students. While I had often been a lone-wolf when planning activities, this demonstrated the importance of a group approach with very clear outcomes outlined in advance, particularly when dealing with the real world.

Also, this was one of the first times I had worked with a group that called out academia as a place of all talk and no action. This stuck with me and was a turning point. A mere 5 months later I left academia because I had admired the actors who I spoke with - they were far more grounded and aware of realities than may people I had been working with.

"You handled a very difficult situation with grace. You were an excellent moderator and kept the space open and safe for everyone, despite that it had become a rather unsafe space for you."
- Workshop participant